Home
/
Blog
/
Barcelona and Beyond

We flew with BA from Gatwick North Terminal. The flight was an early morning flight and was very busy but the staff were courteous and polite. The complimentary breakfast consisted of a cheese croissant and tea and coffee. On our return flight, again a very busy flight back to the UK, complimentary drinks and lunch was served, which consisted of a choice of wraps. Legroom was sufficient and seats were comfortable.

We stayed in two hotels during our stay; The Mandarin Oriental was set back from the main road and you walked up the slope and entered the beautiful reception area. The hotel is fairly new, situated in an elegant upmarket area. The hotel combines the latest technology with subtle touches of the Oriental heritage of a Mandarin Oriental hotel. The building used to be an old bank in the city and the hotel's bar is called the Bankers Bar. The fronts of the safety deposit boxes still covered the bars walls and ceilings. The hotel is situated on the famous Passeig de Gracia, very close to Gaudi’s Casa Batllo with its famous facade. The hotel also offers a Michelin-starred restaurant.

The Parador Aiguablava was in a beautiful idyllic setting, perched high up on the rock of Punta D’es Muts with sea view both sides, stunning rocky coastline surrounded this 4* hotel. This is a very traditional hotel, whitewashed building covering three floors. The hotel is clean and comfortable and its key feature is its location. 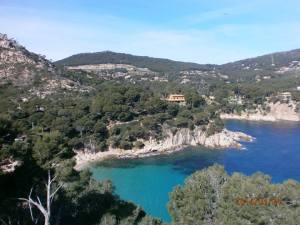 During our stay we had guided tours of the museum of Art in Barcelona, Antonio Gaudi’s Parc Guell and then visited the Gaudi Experience. This included several different experiences including a 4D Audiovisual: a 10-minute journey through Gaudí’s creative mind with moving seats and other surprises. There were also interactive walls; the space has three large interactive walls with all the information on Gaudi, approved by the Polytechnic University of Catalonia’s Gaudi Chair.

We also took in a Gothic city walking tour with a local guide and experienced real tapas in local restaurants.

We visited two vineyards, Celler Casa Sais and Cordoumim in the area. We also visited the medieval city of Pals, the fishing town of Palamos, where we visited a local fish auction and then went on to savour the local fish that evening. 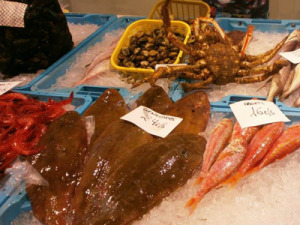 I most enjoyed the tour around Gaudi’s Parc Guell, along with the interactive Gaudi Experience in Barcelona. Gaudi’s works reflect his highly individual and distinctive style and are largely concentrated in Barcelona, notably the Sagrada Familia. Much of Gaudi’s work was marked by his big passions in life: architecture, nature and religion. Gaudi studied every detail of his creations, integrating into his architecture a series of crafts in which he was skilled; ceramics, stained glass, wrought ironwork forging and carpentry. He introduced new techniques in the treatment of materials, such as trencadis, made of waste ceramic pieces.

Gaudi’s work enjoys widespread international appeal and many studies are devoted to understanding his architecture. Today, his work finds admirers among architects and the general public alike. His masterpiece, the still-uncompleted Sagrada Familia, is the most-visited monument in Spain. Unfortunately, I did not have time to visit this masterpiece during my trip. Between 1984 and 2005, seven of his works were declared World Heritage Sites by UNESCO. 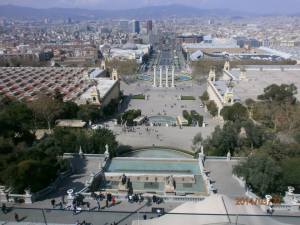 Overall the whole trip was fantastic, however, I would have liked to have experienced a walk down the “Las Ramblas”.

Barcelona and the Costa Brava have so much to offer. The beautiful city of Barcelona is steeped in history, culture and architecture but just a stone's throw away you have stunning coastlines, over 100 km of idyllic beaches and traditional historic Spanish towns with a wine region which produces some lovely wine.

Kathryn and Sarah from Kirker looked after our group so well. We were well informed of the itineraries for each day and I was made to feel very special on my Birthday!

Must See: Gaudi’s Parc Guell
Must do: Sagrada Família
Must try? Local tapas and wine

If you would like to take a city break to Barcelona or enjoy some summer sun on the Costa Brava, drop by one of our travel shops in East Anglia today. We have agents in 9 different locations included Ipswich, Norwich and Cambridge airport.