Home
/
Blog
/
Celebrities - If Only For A Few Days

Celebrities - If Only For A Few Days

Back in 2012, Donna Hardwick took a cruise on board Celebrity Solstice. She travelled around the Med, sailing from Rome’s Civitavecchia port, and this is how she found the experience.

We were fortunate enough to travel to Stansted Airport in style, courtesy of the ‘Classical Touch‘ Jaguar. It was spacious, relaxing and very comfortable.

Our outbound flight with Ryanair was as expected. After reluctantly joining the huge queue to board, there was very little choice of seats due to a lot of them being taken up by people who had already pre-booked. Considering I don’t fly well, the flight to Rome was fine. Ryanair did indeed play their fanfare to boast about the fact they always arrive on time – even though we were 20 minutes late!

Our return flight from Barcelona to (London) Southend was with easyJet. Again this was pretty uneventful. My main thought about this part of our trip was that Barcelona Airport is enormous. 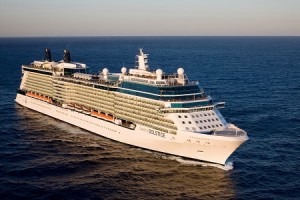 A minibus transfer took us from Rome Ciampino Airport to Civitavecchia port.

The Celebrity Solstice looked stunning. The embarkation process was simple and I was really excited when we got on board. Our cabin was not quite ready for us so this gave us a perfect opportunity to explore the rest of the ship.

I have previously viewed the Celebrity Eclipse. Being part of the same ‘Class’, the Solstice is almost a replica of the Eclipse but the fundamental difference is that the restaurant ‘Qsine’ is replaced by ‘Silk Harvest’ – an amazing Asian speciality restaurant.

Over the four nights we spent on board, we experienced much of what this ship has to offer. The only area which was really forbidden was the kids club. Due to security reasons (keeping the children safe) these were locked at all times. Having two children of my own, I really would have liked a look, though.

We were allocated a Deluxe Ocean View cabin on deck three. In theory, other than the inside cabins, this is the lowest category available. With this in mind, I was very impressed with the space in our cabin – it is the largest ‘standard’ ocean view cabin I have come across to date.

Excursions And Other Inclusions 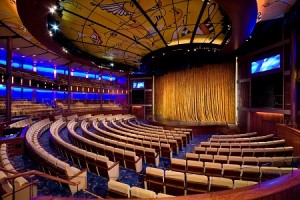 This trip was predominantly used by the Celebrity staff to teach us about their product as a whole. Over the course of the cruise, we experienced several classroom style training sessions. We had an insight into the facilities onboard, the dining experiences and the entertainment available and I felt throughout that they did a good job of showing us what separates the Celebrity ships from the others in the market. They looked to provide us with the tools necessary to recommend their product to potential travellers.

Certain benefits were arranged – we had a Bridge Tour, which was very interesting. There was also a Galley Tour, which I would have liked to have seen more of. Celebrity Solstice can carry up to 2,850 passengers and hey pride themselves heavily on their 5* standard; having built a fantastic reputation based on the quality of their food.

To see and hear about how they achieve the volume and standard of their food is amazing. There is a huge number of kitchen staff, all wearing different coloured scarves to indicate their level of authority, and they work in their own station; creating a small part of what is on offer. The intricate designs on the cakes are to be admired but it’s things like the vegetable station which impressed me when you see these people chopping hundreds and hundreds of the same food over and over again.

We also had a backstage tour of the theatre. A variety of shows is produced on the main stage each night with a large production team.

We left the ship once when we had the third day at our leisure. We docked in Ajaccio (Corsica) for the day and I hadn’t expected the security to be as vigilant as it was. There were several checks made and our handbags had to be scanned upon leaving and re-entering the ship. I haven’t got much to say about Ajaccio I’m afraid; there wasn’t a huge amount going on, but to be fair we weren’t really looking for it. The walk from the port to the centre was only a short distance, though, so it’s easy to explore is you want to. 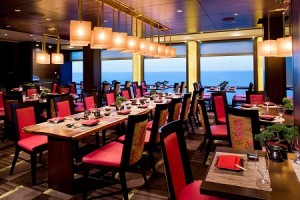 Soaking up the atmosphere on the ship was brilliant. When we first arrived, we found ourselves sitting up on deck with some free fruit punch, listening to a man sing and play his guitar. It was so relaxing.

The dining experiences were also pretty special. On the third night, we paid a cover charge of $25 to dine in the ‘Silk Harvest’ speciality restaurant. The concept is great. We ordered drinks upon arrival but this was the only menu we saw. From then on our waiter continued to bring us a huge array of platters of food for us to try – starters, mains and deserts; fabulous.

On day four, Lucy and I also decided to try ‘Bistro on Five’. With just a $5 cover charge, this offered an alternative daytime experience. The menu consisted of soups, Paninis and pancakes, and the staff were quite insistent that we got our monies worth!

It’s probably a good time to mention the service of the staff. The staff onboard the Celebrity ships work so hard to make the experience as memorable as possible to their passengers. Not only is everyone extremely polite and helpful, but they are genuinely happy to see you. I loved the fact that we heard a bit about the lives of the staff on board. In the living quarters, they all dine together – even the officers and the entertainment team provide entertainment for the staff also. On their free time, they are encouraged to take part in the excursions available at port.

I’ve had a general thought before that the staff employed by cruise lines are over worked and under paid. However, this insight made me feel they really are valued and are quite possibly having fun too!

Amazingly, the one thing which I was a bit disappointed about was the entertainment in the theatre. There were many different nationalities on board and so I guess they couldn’t cater for everyone’s tastes. On the second night, the man on stage was singing and playing the piano. It was kind of rock and roll, up-tempo music, and the man clearly had talent but as he started there was barely anyone in the theatre watching.

My only other issue (which no one can actually do anything about) was the sailing – being on a cruise this can’t be avoided, though! I think we were just really unfortunate with the weather conditions. Being such a large ship and all this talk of them now having stabilisers, I hadn’t really considered the possibility of sea sickness – stupid I know. The movement was pretty immense at times, though. 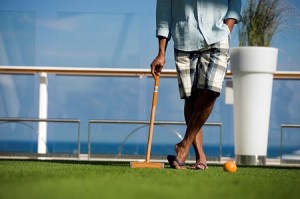 I would definitely recommend Celebrity Cruises as the trip really was good value for money. The service from the staff is exceptional, the food is superb and the facilities onboard are of a high quality – for example, the gym is really well equipped with a large range of machines. The different bar areas with their own different themes and source of entertainment make for a great evening atmosphere and I am confident that families and couples of all ages, who are sociable and like a high standard of accommodation, would enjoy a Celebrity Cruise.

It was the little things included which pleasantly surprised me. In the Oceanview café, you can get free soft and hot drinks pretty much 24hrs a day. Room service was also free – the menu including hot drinks, milk and cookies! There is a large choice of free films and music available in the cabin and it’s often the little things like that which make the difference. It is all very well thought out.

Thank you for giving me this experience. I really enjoyed it and learnt a lot.

Must see? The lawn club – grass on a ship!
Must do? Run on running machine as you set sail
Must try? A martini cocktail in the Martini Bar

If you would like to take a cruise with Celebrity Cruises, just like Donna, or with any other cruise line, our team can make it happen. Stop by our Norwich travel agents or visit any of the other stores we have in East Anglia and on the south coast.