Ray Moye, a Senior Travel Consultant at our Westbourne travel agents, recently took a cruise of Turkey and Greece with Star Clippers. Here are the highlights of his trip.

The economy class Gatwick to Bodrum flight was in one of BA’s latest Airbus A320s, which strangely had no in-flight entertainment whatsoever – rather unusual for a flight of 4 hours or so. The leather seats were comfy, snacks were provided and a light meal was served, which consisted of a Moroccan vegetable wrap, cheese and biscuits and chocolate mousse. This proved quite tasty and perfectly adequate for the flight. Bodrum has a superb new Terminal and our late night arrival meant it was easy to get through. Transfer to the hotel was arranged through Getabed who proved to be very efficient with their rep being easily found.

The return flight from Athens to Heathrow was again by Airbus A320, but this did have drop–down screens and in-flight entertainment including BBC News and a feature film. Again a snack and pleasant meal were included and the aircrew were very courteous and efficient.

After a 40 minute transfer, I arrived at about 22.30 at a lively Jasmine Beach Hotel in Gumbet. My first impressions were not good as my room initially had no electricity, there were phone problems and the furnishings were quite basic. However, those that had been given an earlier hotel tour did speak highly of it. While our rooms were situated in the older part of the hotel, others had been refurbished to a good standard as Club rooms or Club Family rooms, with the best rooms being positioned in the main hotel building itself.

The superb roof-top pool and extensive sun terrace overlooked the resort while restaurants were situated poolside – an ideal location for the extensive buffet breakfast. Quite a decent 3* family hotel but the resort itself was not too impressive. 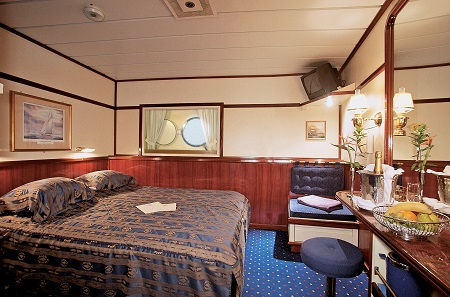 Star Clipper has been described as “an antidote to cruise ships” – a mere 2,298 tons, just 85 cabins and a total passenger capacity of 170. This is intimate cruising designed especially for those  who want to get away from the crowds and normal cruise ship activities but who enjoy sailing, reliving history and mixing with like-minded people.

Star Clipper and its sister ship Star Flyer were the first clipper sailing ships to be built in 140 years and were designed as four-masted schooners. As much as possible, the ship’s 16 sails are used to provide power and it is wonderful to see the ship under full sail, especially when you are given the privilege of sailing alongside it in one of the tenders. The ship also has a diesel engine to help maintain schedules when winds are not so favourable.

Star Clipper Sailaways are a spine-tingling experience. The haunting music of Vangelis’s “1492” theme accompanies the hoisting and unfurling of the sails as the tall ship moves away from the quayside – a real tear-jerker even after you have experienced it several times.

There are two very small pools on an upper deck that is cluttered with ropes, winches, sails, pulleys and all sorts of nautical paraphernalia but there is still room for many sunbeds, giving you the opportunity to lie back, relax and watch the crew at work hoisting, adjusting and hauling in sails. They will even give you the opportunity to help or to climb up to the crow’s nest of the main mast (with safety harness attached). For romantics (and Star Clippers does attract a lot of honeymooners and passengers celebrating a wedding anniversary) the bowsprit netting, suspended over the rushing sea, is a popular place to chill-out.

Apart from the Owner’s Suite, accommodation is provided in six categories of cabin with Category 6 being the lead-in type – rather small inside cabins with upper and lower berths rather than beds. Category 1 cabins are much more spacious, feature a corner or Jacuzzi bath and are very well situated amidships on the main deck. The cabins come in various shapes and sizes, fitting the contours of the ship, with one or two even having a double bed raised up a few feet from the floor.

Portholes feature instead of windows but all cabins are attractively furnished and well equipped with a compact bathroom containing a shower, WC , basin and sizeable cabinet, a 2 -channel radio, colour TV and DVD player, safe, full-length mirror, bedside unit and ample storage space. There are no singles, balcony or wheelchair accessible cabins on this ship.

A welcome plate of cakes and sweets, a small bowl of fruit and a bottle of water were placed in the cabin on the first day. The lack of tea / coffee-making facilities in the cabin was not a problem as these items, plus fresh fruit, were freely available 24-hours a day from the piano bar.

Apart from the cruise itself, nothing was included but Fay, our superb Star Clipper host, allowed us to do our own thing at every port of call, which for me meant doing photo-recces at every opportunity, visiting the following places:

Standing on the site of the ancient city of Halicarnassus, Bodrum is steeped in history and I spent a lot of time exploring the 15thcentury Castle of St Peter. Originally built by the Knights of St John, the Castle now includes the Museum of Nautical Archaeology; full of ancient artefacts originally collected by local sponge divers. The busy harbour was lined with small ferries, fishing boats and a marina full of gulets. Bodrum is a pleasant place to stroll around by day but is infamous for its nightlife with some of the biggest clubs in Europe. A complimentary ferry operates between the cruise terminal and Bodrum harbour.

While others chose to sunbathe on Iztuzu beach, I opted for a very interesting river trip that visited the ancient city of Caunos with its Roman amphitheatre, temples, mosaics and the Lycian tombs that are situated half-way up a cliff. Stopping briefly at Iztuzu, we watched loggerhead turtles that use this beach to lay their eggs at this time of the year. An alternative excursion would have included a visit to the mud baths of Dalyan. 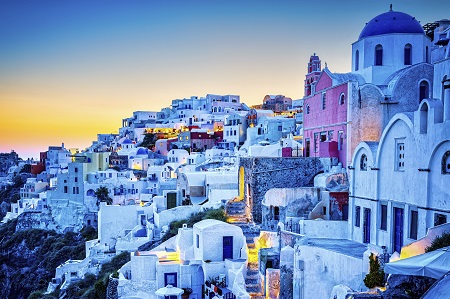 As this was my first visit I decided to splash out on a full day excursion which started in Akrotiri – an ancient city that was destroyed by a volcanic eruption, much like Pompeii. From the highest point on the island, we looked down on the two main beach resorts: Kamari (right next to the airport) and Perissa.

Continuing to the northernmost tip, we came to Oia (pronounced ‘ear’). As a keen photographer, I then spent an hour in heaven; everywhere I looked was a pretty picture, with the white sugar-cube houses cascading down the mountainside, blue domed churches, bougainvillaea in abundance and even a classic Greek windmill. I could have spent all day here as it was so beautiful and there were so many places to explore. Sadly, I couldn’t stay long enough to see the legendary Oia sunset.

Returning to Thira, the coach dropped us off some considerable way from the cable car, meaning a 15-20 minute walk for some- not recommended for those that are elderly or less mobile. Access to the little harbour is easiest by cable car, but walkable for those who are fit, down a zig-zag slope, or else there is always the donkey taxi.

For many people, this is the prettiest harbour in the Greek islands, with its only town rising in tiers of fine buildings from a horseshoe harbour lined with tavernas. Traffic-free Hydra is very popular with island-hoppers or day-trippers, with Athens being only a short hydrofoil journey away. 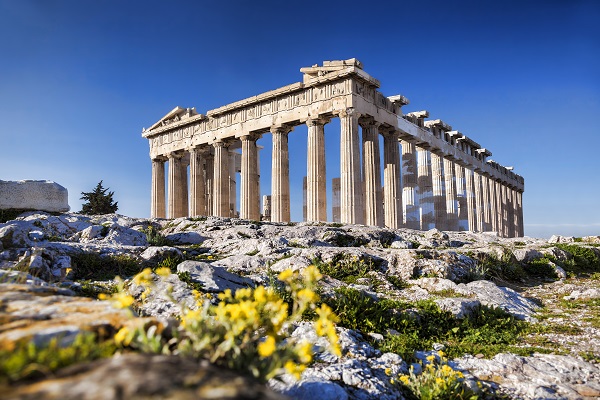 At the end of the voyage, we were taken to the 5* St George Lycabettus Hotel. Situated in Athens’ most exclusive area and atop its highest hill, this chic hotel has breathtaking views of the Acropolis and the city spread out beneath it. Featured by Star Clippers for its stopovers, this is a really impressive hotel. A typical Greek meal in the rooftop restaurant was a fitting end to a superb educational.

I would certainly recommend a trip similar to the one I took. Star Clippers boasts one of the highest levels of repeat business in the cruise industry and it is not difficult to see why:

When considering a Star Clipper cruise, there are just two very important points to bear in mind:

Finally a very big thank you to Fay from Star-Clippers and all my travel companions for a really enjoyable and informative educational.

Must see? The town of Oia in Santorini
Must do? Climb up to the crows’ nest (if you’re brave enough)
Must try? Some of the various water sports on offer

If you would like to enjoy a trip like Ray’s, for your honeymoon or as a romantic break, Fred. Olsen Travel will create the best package for you. Visit one of our travel shops in Cambridgeshire, Suffolk, and Norfolk, or those on south coast, and speak to a member of our team today.